Charlottesville mayor says he was shut out of security talks

Charlottesville mayor says he was shut out of security talks

CTV News–7 hours ago
Signer, who has a spot on the five-person City Council, said the group was not given the security plan for the rally. He also wrote that when he … 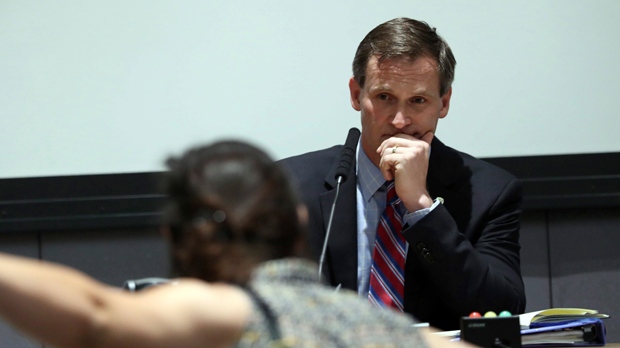 CHARLOTTESVILLE, Va. — Charlottesville officials met privately Thursday to discuss “personnel matters” in the wake of a deadly white nationalist rally, the city’s mayor said in a statement in which he also asserted he’d been largely shut out of security preparations for the event.

In a lengthy statement on Facebook posted ahead of the meeting, Mayor Mike Signer wrote that under Charlottesville’s form of government, the city manager “has total operational authority” over events like the Aug. 12 rally.

Signer, who has a spot on the five-person City Council, said the group was not given the security plan for the rally. He also wrote that when he asked during a briefing days before the event what he could do to be helpful, Police Chief Al Thomas responded, “Stay out of my way.”

The statement comes as city leaders are facing scrutiny over their response to the event, believed to be the largest gathering of white nationalists in at least a decade. Crowds fought violently in the streets, one woman was killed when a car plowed into a group of counter-protesters, and two state troopers died when their helicopter crashed.

Charlottesville residents, rally organizers and law enforcement experts are among those who have criticized the city’s handling of the lead-up to the rally and the chaos that ensued. Anger boiled over at a city council meeting earlier this week, where scores of people screamed and cursed at councillors. Some called for the leaders to resign.

Signer said the events on Aug. 12 “raised serious questions about the city’s handling of security, communications, and governance.”

Those are questions that the city council should ask “as the ultimate authority over the city manager,” he wrote.

Councillors discussed “an array of different things that transpired and how we can improve,” Bellamy told The Associated Press, declining to elaborate further because the meeting was a closed session.

The council has called for an independent review of all decisions related not only to Aug. 12, but also a July KKK rally and a prior torch-lit rally of white nationalists at Emancipation Park, Signer said in his statement. He said he expects details to be announced shortly.

The rally was sparked by the city’s decision to remove a statue of Confederate Gen. Robert E. Lee from Emancipation Park, a decision that’s on hold while a lawsuit plays out. On Wednesday, workers draped the statue of Lee and another of Gen. Thomas “Stonewall” Jackson in black fabric meant to symbolize the city’s mourning.

City officials had been expected to host a “community recovery town hall” Thursday evening in collaboration with the Community Relations Services of the Department of Justice. But they announced Thursday morning that it had been rescheduled for Sunday due to conflicts with a local high school’s student activities.

Officials will provide an update on “recovery efforts” at that meeting and offer opportunities for public comment, according to a news release.

In other developments Thursday, Christopher Cantwell, a white nationalist from Keene, New Hampshire, made an initial appearance in Albemarle County General District Court.

He faces two counts of the illegal use of tear gas or other gases and one count of malicious bodily injury with a “caustic substance,” explosive or fire in connection with a torch-lit rally on the University of Virginia campus the night before the white nationalist rally.

Contacted by The Associated Press on Tuesday, Cantwell acknowledged he had pepper-sprayed a counter-demonstrator. But he insisted he was defending himself, saying he did it “because my only other option was knocking out his teeth.” He also said he was looking forward to his day in court.

UVA police said late Wednesday night that he had turned himself in.

Cantwell told a judge Thursday that he planned to hire his own attorney, The Daily Progress reported . The judge did not set bond, but told Cantwell his attorney could request a bond hearing later.