CBC.ca–Sep 11, 2017
The UN Security Council on Monday unanimously approved new sanctions on North Korea in a watered-down resolution that eliminated a ban …
North Korea represents the most imminent threat to US national …
Opinion–Fox News–21 hours ago
View all 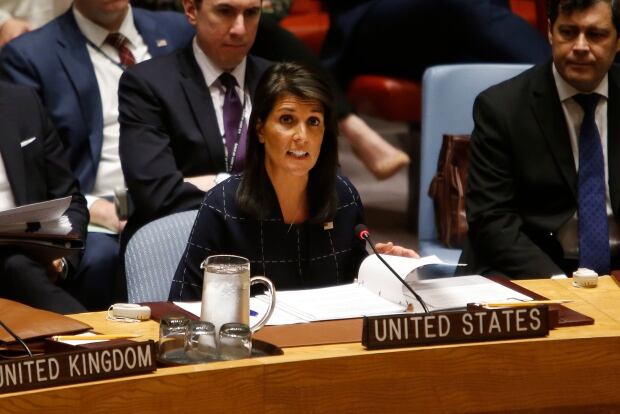 The UN Security Council on Monday unanimously approved new sanctions on North Korea in a watered-down resolution that eliminated a ban on all oil imports and an international asset freeze on the government and leader Kim Jong-un that the Trump administration wanted.

The resolution does ban North Korea from importing all natural gas liquids and condensates. But it caps Pyongyang’s imports of crude oil at the level of the last 12 months, and it limits the import of refined petroleum products to two million barrels a year.

U.S. Ambassador Nikki Haley told the council after the vote that “these are by far the strongest measures ever imposed on North Korea … but we all know these steps only work if all nations implement them completely and aggressively.”

U.S. Ambassador to the UN Nikki Haley speaks after voting to adopt a new sanctions resolution against North Korea during a meeting of the UN Security Council on Monday. (Jason DeCrow/Associated Press)

“Today we are saying the world will never accept a nuclear armed North Korea,” she said. “We are done trying to prod the regime to do the right thing” and now are instead taking steps to prevent it “from doing the wrong thing.”

Haley reiterated that the United States does not want war and said “North Korea has not yet passed the point of no return.” She said if Pyongyang gives up its nuclear program and proves it can live in peace, the world will live in peace with it.

The resolution represents a swift response to North Korea’s sixth and strongest nuclear test explosion Sept. 3, which it said was a hydrogen bomb, and to its escalating launches of increasingly sophisticated ballistic missiles that it says can reach the United States.

The text was agreed to after final negotiations between the U.S. and China, the North’s ally and major trading partner. Haley praised the “strong relationship” between President Donald Trump and Chinese President Xi Jinping for enabling the resolution’s adoption.

But its provisions are a significant climb-down from the toughest-ever sanctions that the Trump administration proposed in the initial draft resolution it circulated last Tuesday, especially on oil, where a complete ban could have crippled North Korea’s economy.

The cap on the import of petroleum products could have an impact, but North Korea will still be able to import the same amount of crude oil that it has this year.

According to the U.S. Energy Information Administration, China supplies most of North Korea’s crude oil imports, which a U.S. official put at four million barrels a year. The agency cited UN customs data showing that China reported sending 6,000 barrels a day of oil products to North Korea, which it said is mostly gasoline and diesel fuel vital to the country’s agriculture, transportation and military sectors. 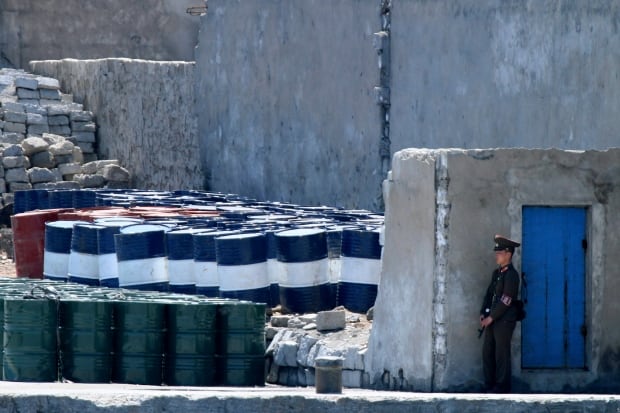 A North Korean soldier stands guard near oil barrels stocked up near the river bank of the North Korean town of Sinuiju in May 2016. China reportedly sends 6,000 barrels a day of oil products to North Korea. (Chinatopix via AP)

The textile ban is significant. Textiles are North Korea’s main source of export revenue after coal, iron, seafood and other minerals that have already been severely restricted by previous U.N. resolutions.

North Korean textile exports in 2016 totaled $752.5 million US, accounting for about one-fourth of its total $3 billion in merchandise exports, according to South Korean government figures.

The U.S. official, speaking on condition of anonymity ahead of the council vote, said the Trump administration believes the new sanctions combined with previous measures would ban over 90 per cent of North Korea’s exports reported in 2016.

Pyongyang ‘ready and willing’ to respond

The original U.S. draft would have ordered all countries to impose an asset freeze and travel ban on Kim Jong-un and four other top party and government officials. The resolution adopted Monday adds only one person to the sanctions list — Pak Yong-sik, a member of the Workers’ Party of Korea Central Military Commission, which controls the country’s military and helps direct its military industries.

The original U.S. draft would also have frozen the assets of North Korea’s state-owned airline Air Koryo, the Korean People’s Army and five other powerful military and party entities. The new resolution drops sanctions on the airline and army and would only add the Central Military Commission of the Workers’ Party of Korea and the party’s powerful Organization and Guidance Department and its Propaganda and Agitation Department to the sanctions blacklist.

North Korea’s Foreign Ministry issued a statement early Monday saying it was watching the United States’ moves closely and warned that it was “ready and willing” to respond with measures of its own. It said the U.S. would pay a heavy price if the sanctions proposed by Washington are adopted.

Britain’s UN ambassador, Matthew Rycroft, told reporters who questioned the watering down of the initial U.S. text that “there is a significant prize in keeping the whole of the Security Council united and I very much hope that all my council colleagues will vote in favor of the revised draft.”

Rycroft called the resolution “very robust” and “a very significant set of additional sanctions on imports into North Korea and exports out of North Korea and other measures as well.”

French Ambassador Francois Delattre said, “We are facing not a regional but a global threat, not a virtual but an immediate threat, not a serious but an existential threat.”

China and Russia had called for a resolution focused on a political solution to the escalating crisis over North Korea’s nuclear program. They have proposed a freeze-for-freeze that would halt North Korean nuclear and missile tests in exchange for the U.S. and South Korea stopping their joint military exercises — but the Trump administration has rejected that. 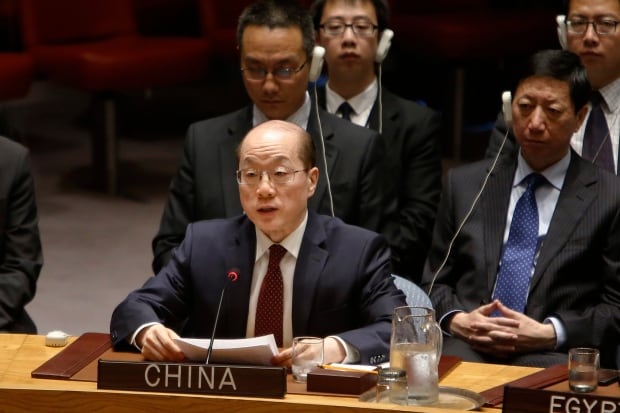 The resolution adds new language urging “further work to reduce tensions so as to advance the prospects for a comprehensive settlement,” and underscoring “the imperative of achieving the goal of complete, verifiable and irreversible denuclearization of the Korean Peninsula in a peaceful manner.”

The resolution also adds language underscoring the Security Council’s commitment to North Korea’s sovereignty and territorial integrity, to “a peaceful and diplomatic solution to the situation,” and “its concern that developments on the Korean Peninsula could have dangerous, large-scale regional security implications.”

It retains language on the council’s “determination to take further significant measures” in the event of a new nuclear test or ballistic missile launch.