Many people are not aware of the power that a personal security guard has on public property. While they may not have the same authority as law enforcement, security guards are permitted to arrest citizens for serious offences, or when witnessing a crime in progress. 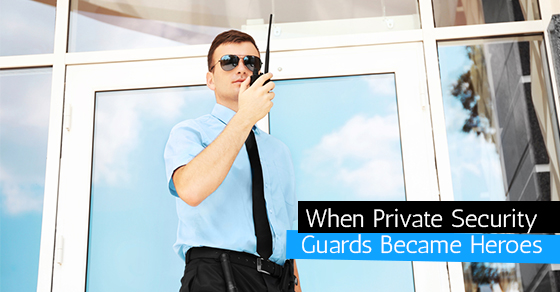 It was business as usual when popular singer-songwriter Taylor Swift stopped in Edmonton,
Canada to perform at Rexall Place during a tour for her album 1989. But as she was performing her song “Bad Blood,” two men launched towards her on the stage and tried to get a hold of her. Fortunately, her security guards were quick to catch the men and take them off the stage.

Sometimes just doing your job properly puts you in danver. A Vancouver security guard noticed a woman potentially shoplifting and approached her before the store attendants had a chance to. As it turned out, the woman was armed and dangerous, pulling a knife and slashing the security guard’s arm. Luckily he kept the store and the employees safe, and the assailant was arrested shortly after.

Private security personnel guarding cash and precious metals are permitted to carry and use guns in Canada. In one particular event in Scarborough, a private security guard shot one of the men attempting to rob a jewellery store he was guarding. The two robbers were carrying guns when they stormed into the shop and smashed the glass to access the expensive jewellery.

Bodyguards are not allowed to carry guns in the country. In addition, security personnel carrying guns must not only work with a security agency approved by the government, but also apply for a Possession and Acquisition License.

Nathaniel McNeil, a private security guard, took down a man wielding a machete outside a shopping centre in downtown Toronto. The man had already injured at least one bystander with the machete.

The security guard knocked the suspect to the floor, ripped the weapon out of his hand, and subdued him with handcuffs before the police arrived and charged him with attempted murder and assault with a weapon, among others.

Kevin Vickers, a 58-year old security guard acting as the sergeant-at-arms, reportedly shot a gunman who attacked the Ottawa Parliament building. The incident happened outside the MPs’ caucus rooms.

Paula Santos, a private security guard at PATH station in Jersey City, used her instincts and 20+ years of experience working as a security guard (including 4 years working at a CCTV monitoring facility) to stop a looming sexual assault.

By simply watching the body language and behavior of certain individuals, Santos spotted a suspicious man who had stepped off a train at the Manhattan Christopher Street station, and opted to remain at the end of the platform rather than leave the station. He was standing close to a 31-year old woman and her companion, and then approached them.

From her screen, the companion seemed unconscious, and then the man started molesting the woman. As soon as she saw this, Santos contacted Port Authority police. Before they arrived, her colleague, Grant, contacted PATH communications staff who used the public address system to deter the attacker. The man was charged with sexual abuse and attempted rape, among other charges.

A while ago, it was perceived that only business executives and celebrities needed bodyguards or private security guards to protect their loved ones and valuables. But with increased access to personal information, other people are feeling threatened and in need of personal protection services.

Though most clients comprise of corporations and public figures, anyone can enjoy the benefits of security and peace of mind that come with hiring private security guards. This includes private businesses transporting valuable merchandise, or gamblers making an occasional lump sum deposit, or even a husband/wife looking to ward off an estranged spouse during a nasty divorce.